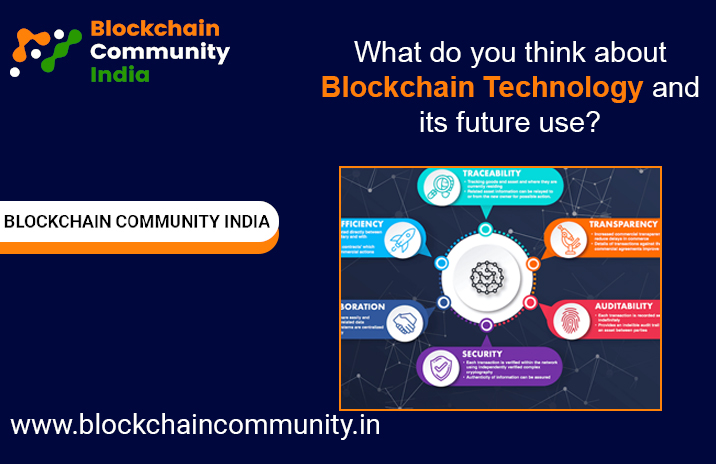 What Do You Think About Blockchain Technology And Its Future Use

Decentralized and secure data sharing is possible with blockchain. The blockchain network is made up of computers, also known as nodes, that are linked together to form a chain. Any transaction in the network is carried out using unique codes that are linked to each transaction, making all transactions visible and traceable back to their source. Blockchain uses cryptography to store information in blocks (records) within blocks of connected data.

Here are a few reasons why businesses should pursue Blockchain adoption.

1) Corruption must be eradicated. Because of Blockchain's openness and incorruptibility, it may be used to track any shady transactions in both the public and private sectors. In a nutshell, it eliminates corruption in a variety of ways, including making all actions visible, prohibiting unilateral modifications, and ensuring more consistent record-keeping.

2) Lowering transaction costs. With fewer third-party involvement, transaction processing would be substantially faster. This translates to decreased fees when using low-cost blockchain-based goods such as Bitcoin or Ethereum. As part of its decentralized nature, blockchain infrastructure can readily safeguard ownership information.

3) Improving the trustworthiness and indisputability of digital documents. Yuval Harari, author of Homo Deus: A Brief History of Tomorrow, claims that "Blockchain technology is self-authenticating. It builds trust in itself, and as a result, it is a new sort of collective intelligence for our time."

4) Ensuring fiscal accountability. According to Accenture, a prominent consultancy and management firm, governments may save up to $20 billion per year by utilizing blockchain technology. It not only saves money but also allows information to be shared securely among government departments without the risk of transaction details being disclosed or stolen by hackers. Information can be shared secretly between two parties with no third parties involved, yet blockchain saves only data connected to the transaction.

5) Promoting business and job creation. Entrepreneurs can start new enterprises without the requirement for approval from third parties, the government, or even investors, thanks blockchain technology.

6) Increasing the ease with which digital assets can be transferred. Any corporate operation requires the ability to transmit huge quantities of money safely, swiftly, affordably, and in a decentralized manner. Aside from these benefits, blockchain provides ownership control by tracking the transfer of digital assets. On this system, anything from information to actual items like houses or property deeds can be recorded.

7) Avoid fraud when purchasing used goods on peer-to-peer (P2P) marketplaces such as eBay and Amazon. Due to the decentralized and transparent nature of blockchain, all information, including the product's origin and history, inspection reports, and other details, will be recorded.

A Blockchain-based marketplace might enable transactions between participants all over the world without the need for a central authority, currency conversion, or foreign transaction fees (with an exception of miners who are providing processing power for transactions). Several firms, including Open Bazaar, which offers fee-free peer-to-peer shopping sites, are already using the technology. Buyers and sellers retain Bitcoins in escrow accounts to facilitate payments and provide trust in each encounter.

9) Increased voting transparency and fairness. Blockchain technology has the potential to be a wonderful way to record votes anonymously and securely, increasing citizen faith in global elections. Using blockchain, fraudulent acts such as buying voter lists and other miscounts might be drastically reduced. The key benefit is that all information would be open to the public and properly recorded. Not only would they be able to vote again, but they would also be able to simply look up their previous votes.

10) The capacity to transfer intellectual property rights without requiring the approval of a third party. According to EY, "an estimated $2 trillion worth of intellectual property is sold abroad, with an additional $540 billion in revenue flowing from licensing agreements," yet royalty payments, in particular, are frequently delayed or never paid.

11) End-to-end tracking, which can record any location changes along the route, to follow items via supply chains and decrease food waste. Furthermore, thanks to the traceability feature and transparency of blockchain, anyone will be able to trace where the products came from. This could be significant since varied regulations across borders are problematic for "supply chain-related industries such as pharmaceuticals, electronics, agricultural, and luxury."